In one place where I lived before Venice, the only thing I had for a desk was a coffee table, and I liked it so much I kept the floor desk thing going for years and years, sitting cross-legged on a giant pillow. At this version of it in Venice, I wrote a whole lot of papers for classes I was taking at Santa Monica College. Oh, and two books and a screenplay, and a bunch of other stuff. No computer then, of course. I had a small, lightweight portable typewriter. 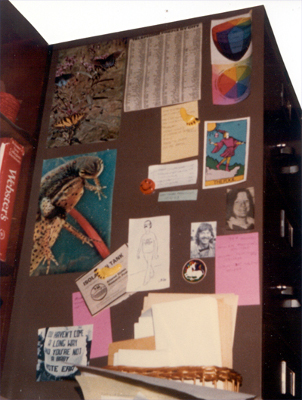 Sitting at the desk, if I looked up and to the right, the side of the file cabinet was there with things stuck to it. Tom Robbins, Bobby Sands, the Tarot Fool card, and what might be a unicorn.

Above the file cabinet: The Lenny Bruce portrait was painted (from a photo) by Dale Hartman who gave me it for a birthday or Christmas present. The colorful painting was by Joy Doyle, a long-ago friend when I lived in Buffalo.

You can’t really tell, but that bottle on top of the cabinet was covered with macrame, an art form I’d only seen hanging on walls but not embracing glass bottles. There was a little metal cat on a stand, whose tail had holes in it from which to suspend earrings. On the right is part of a long panoramic photo of Niagara Falls which dated I think from 1910 or so. Years later I sold it on eBay.

The closet changed a lot, depending on how fully I was inhabiting the room, which depended on who else lived in the apartment at the time. There was even a spell when the doors stayed closed with lights on inside, if you catch my drift.  That chair was a rescue – it had a broken leg, so I cut them all off, and made covers of South American textile.

The yellow poster contained numerous sayings by a sage named Vernon Howard, some of which I found very helpful. I kept an ever-changing gallery of magazine photos up there too, and of course, always, schedules from the Fox Venice Theater.

Sometimes just a small cot was in there, and sometimes a bigger mattress. When the room had to serve as combination bedroom and office, I got 6 rectangular boxes with one open side each, made from composite wood, for the mattress to rest on top of. If you arranged them right, it created a lot of storage space underneath. Some spaces could only be gotten to by removing the mattress, and that was okay too, as a place to keep things that other people didn’t need access to.