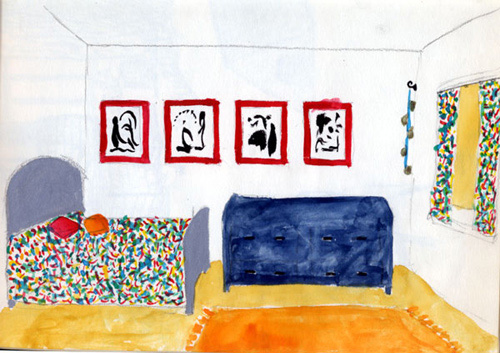 Relocation is such a drag, and this will probably turn into a whole series of pisses and moans about what a stone bummer it is. When moving is in the cards, the first thing I think about is how to reduce the bulk.

In between times, I think about how things could be sorted out, to achieve a drastic reduction of cubic footage. A kind of mental triage process is always going on, calculating what to get rid of next, with the rough outline of a plan ready to spring into action when a move is announced. What if, at the next place, there is only half as much space?

Here’s an example of the dilemma. Say I have three large beautiful pieces of cloth, with different qualities – one is very lightweight, another is dark and thick enough to block out light, and the third has a waterproof side. On principle, I don’t mind getting rid of two, and just keeping one – but which? In the next place I live, there’s a very good chance that a big swath of fabric will be needed for something. And it will probably be one of the pieces I got rid of. Sigh.

A person might say, “So if you want to reduce the amount of stuff, let all three of them go. You can always find another piece of cloth.” But no. For the car-free person, that’s a major expedition, half a day, at least, spent biking or busing to somewhere and back. It’s a big expenditure of time. And just after a move, there isn’t usually a lot of discretionary cash lying around. Balancing all the factors, maybe it is worthwhile to keep three pieces of cloth, just in case, even if it does add to the amount of stuff that will need to be moved.

One thing I’ve become resigned to, in moving, as in everything else: it’s really hard for a lot of people to relate to a car-free person. They just don’t get it.